PEOPLE’S WORLD: ‘Johnny Got His Gun’ on stage: I resist, therefore I am 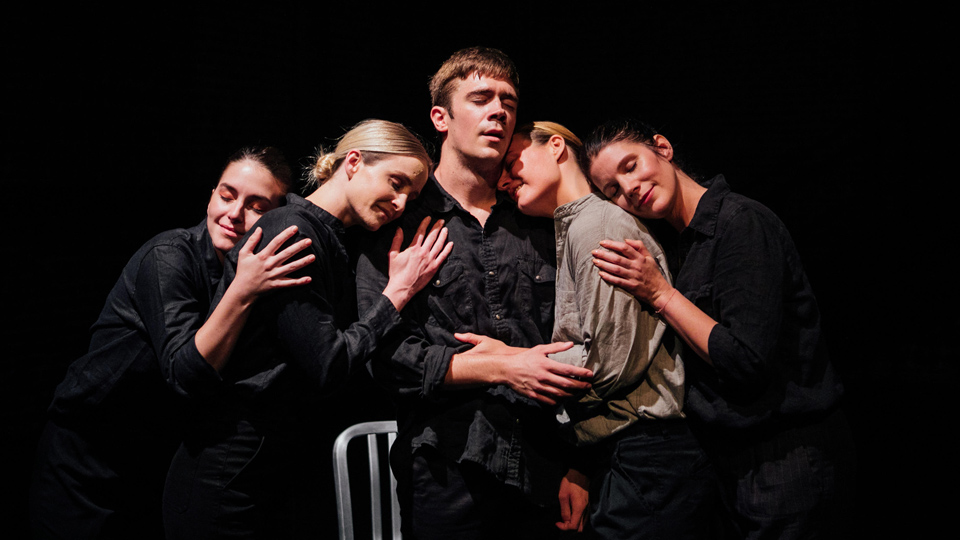 LOS ANGELES—Johnny Got His Gun by Dalton Trumbo, reputedly “Hollywood’s highest paid screenwriter,” who went on to be one of the Hollywood Ten and help break Tinsel town’s Blacklist, is arguably one of the two greatest antiwar novels to emerge out of World War I, the other being German WWI veteran Erich Maria Remarque’s 1928 All Quiet on the Western Front (the 1930 screen adaptation won the Best Picture Oscar, while Lewis Milestone scored the Best Director Academy Award, with the film receiving two other nominations). Trumbo’s title is derived from the gung-ho ballad “Over There,” which begins:

“Johnnie show the Hun
Who’s a son of a gun
Hoist the flag and let her fly
Yankee Doodle do or die….”

The refrain in George M. Cohan’s popular morale booster, recorded by Enrico Caruso among others, is still remembered:

Indeed, this jingoistic ditty is heard as The Actors’ Gang’s gripping production of Bradley Rand Smith’s stage version of Trumbo’s Johnny Got His Gun opens. Having read Trumbo’s novel—which was, ironically, published on September 3, 1939, the exact day France and the UK declared war on Germany for invading Poland—and seen Trumbo’s 1971 film version of Johnny, I took my seat in the Ivy Substation filled with anticipation. How could The Gang and director Tim Robbins successfully translate this work for theatre? After all, the attributes of the screen and page are different from those of the stage.

Without revealing too many details, Johnny’s protagonist, Joe Bonham (Nathan Woodworth), is an all-American doughboy horribly dismembered and disfigured by enemy artillery at the frontlines in France. Let’s put it this way: This is one Johnny who won’t be marching home (a recording of Patrick Gilmore’s 1863 Civil War song is also played during the drama). So while the medium of the novel easily lends itself to stream of consciousness and cinema similarly can portray interior monologues, Johnny’s mise-en-scène presents problems and puzzles.

But leave it to the imaginative Gang and Robbins, known for their stylistic innovations and out-of-the-box staging, to solve these creative conundrums. I won’t ruin your surprise by disclosing how The Gang-sters stage Johnny other than to say that, shockingly, Robbins does not resort to his beloved commedia dell’arte masks (although a gasmask along the lines of those Italian performers of old might have been apropos).

Throughout the 90-ish minute one-acter Joe’s awareness of his dire situation rises, moving from the micro to the macro. Symbolic of the “little people” and largely based on Trumbo’s boyhood recollections of growing up in Colorado, Joe muses: “I am the nearest thing to a dead man on Earth.” As Joe evolves, his determination to live intensifies, and his thoughts turn to the nature of what cut him down in the proverbial bloom of his youth: War.

Ruminating on the platitudes Woodrow Wilson and Co. used to lure young Yanks to fight in the insane bloodbath that was WWI, such as “making the war safe for democracy,” Joe asks: “And for what?” did they die. In Western Front, Remarque’s German soldier Katczinsky, a cobbler, jokes that instead of waging a war fought by ordinary people, the leaders of Europe should be stripped down to their skivvies to settle their differences by “fight[ing] it out with clubs.” Joe echoes their sentiments, asking: “How many generals died in a war?”

In addition to being about war, Johnny is about the human brain, in particular memory, which endows us with our humanity. The stricken Joe teaches himself a sense of time and how to communicate. As Christopher Trumbo and Larry Ceplair write in their 2015 biography Dalton Trumbo, Blacklisted Hollywood Radical: “Joe is, in effect…an exemplar of René Descartes’s apothegm: I think, therefore I am.”

Joe’s resolve grows along with his expanding consciousness and he insists, “You can’t stop my mind, bastards!” Like Ron Kovic in Born on the Fourth of July, Joe’s bodily decimation leads him to assume an antiwar stance. Perhaps Bonham’s motto could be: “I resist, therefore I am.”

Johnny expresses recurring themes in other Actors’ Gang productions, like its similarly WWI era-themed 2008 bone-chilling production of Bury the Dead by Irwin Shaw and its adaptation of George Orwell’s 1984, which The Gang debuted in 2006, globetrotted with and have revived. At the opening night reception Robbins agreed with my observation that Joe Bonham was similar to Winston Smith, the Orwellian hero of 1984.

Some theatergoers may find parts of Johnny to be tough, slow going, not only because of the subject matter per se, but also considering the staging limitations imposed by the protagonist’s lack of physical, if not mental, mobility. Playwright Bradley Rand Smith told me at the after party that this was the first time his adaptation was performed with a full cast. Initially, his stage version was a strictly one-man show, which opened at Manhattan’s fabled Circle Rep in 1982 starring Jeff Daniels.

As dramatized in the 2015 biopic Trumbo starring Bryan Cranston as the title character, Dalton, who’d joined the Communist Party in the 1940s, after writing Johnny, was blacklisted throughout the 1950s, scoring Oscars under different pen names along the way, until he received screen credit in 1960 for both Exodus and Spartacus. In doing so Trumbo helped end the Hollywood Blacklist and was one of the few persecuted talents to make a major comeback, writing/co-writing 1965’s Burton-Taylor The Sandpiper, 1966’s extravaganza Hawaii, the first JFK conspiracy assassination feature, 1973’s Executive Action, and 1973/2017’s Papillon.

Johnny was the only movie Trumbo ever directed. Released in 1971, the Vietnam War rendered Dalton’s antiwar saga still relevant, and its poster included a close-up of a hand making the peace sign. As I recall, the film was promoted as something like “the movie that will end the war.” Donald Sutherland portrayed Jesus (who is completely edited out of the play.) The movie was remade in 2008. Unfortunately, it remains timely, especially given the thousands of U.S. combatants suffering from PTSD, some of whom lost limbs in Afghanistan, Iraq, or god-knows-where-else due to IEDs, etc. (not to mention the hundreds of thousands of people killed, wounded and displaced by Imperial America’s endless aggression). One hopes in addition to promoting this play to peace groups that instead of just preaching to the choir The Gang reaches out to our wounded veterans, and deluded youth considering becoming cannon fodder for Uncle Sam.

Art is an excellent way to commemorate historic events and personages: Robbins told me that staging Johnny was, in part, to remember the 100th anniversary of the end of World War I, with its vicious trench warfare, poison gas attacks and up-until-then unparalleled butchery. The completely unnecessary mass carnage that was WWI ended Nov. 11, 1918—and The Gang’s final performance of Johnny is Nov. 10. (L.A.’s Marxist Movie Series will present Margarethe von Trotta’s 1986 biopic about the German revolutionary who opposed WWI, Rosa Luxemburg, on Nov. 29.)

The Gang’s Johnny is radical in form and content. Robbins adroitly directs the ensemble with his usual aplomb. In addition to Woodworth, the cast, which is mostly minimally garbed in black and gray, includes: Pierre Adeli, Mela Green, Scott Harris, Kaili Hollister, Mary Eileen O’Donnell, Luis Quintana, Tess Vidal and Andrea Monte Warren. There are some evocative shadows created by moody lighting, with a set as bare as no man’s land. Let’s pray that plays like this will one day became completely irrelevant, but alas, for the time being this compelling drama remains all too topical for socially conscious ticket buyers and for anyone even remotely considering volunteering to join Trump’s military.