KCRW Opening the Curtain: A method to the political madness

A method to the political madness 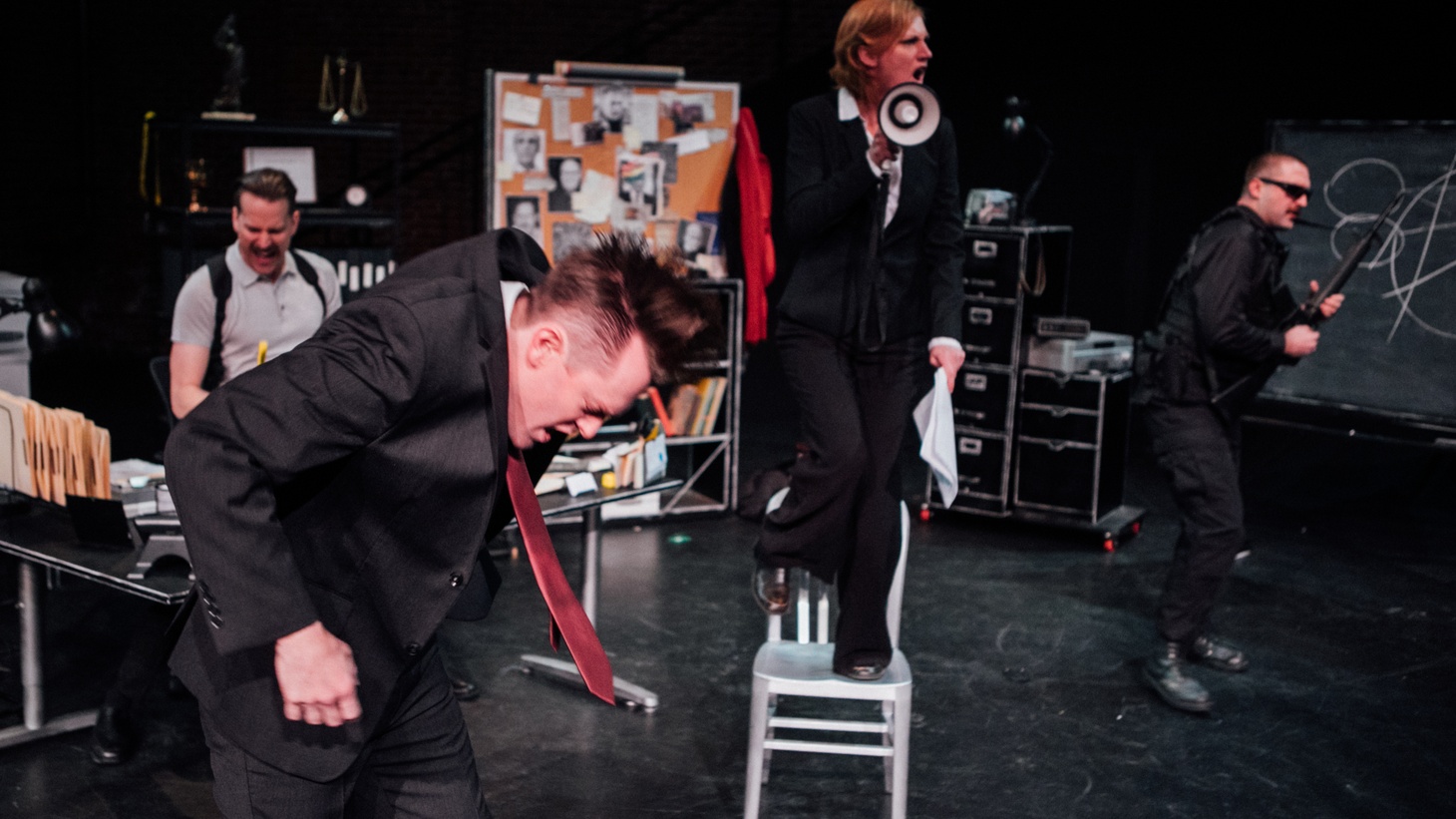 “The Accidental Death of an Anarchist” by the Actors’ GangPhoto credit: Ashley Randall

The Actors’ Gang has two things that run through their productions: style and politics.
The style is a distant relative of Commedia Dell’Arte, the Italian comic tradition built around stock characters like Harlequin, Pantalone, the corrupt judge.  Even if you’ve never seen a Commedia show, chances are the sitcoms of your youth were built on the same formula. To their credit, the Gang has used their version of this style as the foundation of their company: using it to train new company members and as an artistic doorway into each production.
The politics of an Actors’ Gang show often closely resemble the politics of their artistic director, Tim Robbins.  No surprise there, the best artistic directors pick shows that reflect how they see the world – or maybe how they imagine it to be.  A Gang show is a reliably liberal affair and the themes of those falsely imprisoned, racism, and oppression figure prominently in their work.  Again, it’s part of the companies foundational ethic.
Their style and their politics are palpable in the Actors’ Gang shows…sometimes to their detriment often obscuring the play at hand or making it feel like little more than a vehicle to exercise these pre-existing conditions.  A bit like the saying, *if all you’ve got is a hammer, everything looks like a nail.*
Now, if you’re a person who believes in what the Gang believes – the shows can be great vehicles to feel that simpatico.  But at their worst they can feel like someone is hammering a script into submission.
But what if the script is a nail?
Dario Fo’s 1970 classic protest comedy “The Accidental Death of an Anarchist” is the perfect nail for the Actors’ Gang.
Not only is a Mr. Fo a clown drawing deeply on Commedia Dell’Arte, his politics (that title should give you a hint) are deeply sympathetic with the Gang.  The result is a perfect match.
The comedy circles around a maniacal fraudster who comes to torment a corrupt police station.  Played in the Gang production by TLU, the Maniac as Mr. Fo’s script calls him – is a bit like the comedic equivalent of Jim Carrey in the “In Living Color” era.  It’s over the top, often sophomoric comedy of idiocy. Like the Commedia itself, it relishes in exposing the hypocrisy and corruption of those in power.
The inciting incident is that supposedly accidental death of an anarchist who fell from the window of the police station.  Through a series of coincidences our comedic protagonist finds himself posing as a *special prosecutor* sent to investigate this corrupt regime?
Sound familiar?
That’s no accident.  The Actors’ Gang production liberally updates the original text to reflect our current political climate.
If the Gang’s style and politics are the first two key ingredients – our current political mess is clearly the third.
I’ve seen “The Accidental Death of an Anarchist” a half dozen times and it’s always felt a bit distant – like a case study of someplace else.  It’s not that the corruption felt so foreign but there was something just too over the top about it. It’s frightening that the play feels perfect for out times.
That doesn’t mean it’s a perfect piece.  As good as the Gangs’ production is – it begins to lag a bit after the initial shock wears off – but stick with it.  There’s a last minute reversal that makes it worth the journey and suggests there’s a deep method to all this madness.
“The Accidental Death of an Anarchist” plays at the Actors’ Gang in Culver City through March 9th.
Credits