Ain’t we got fun? If you remember that Jazz Age classic, you’ll know that the lyrics include “the rich get richer, the poor get …children,” but hey, we got fun. Then there was a crash, and somehow, at least some of the rich still got richer. But we forget that, because it’s not terribly convenient to the story. And Americans love a good story about themselves, almost as much as we love a good con.

Playwright Jack Pinter knows that, and with composer Roger Eno takes it to a ridiculous extreme with “Captain Greedy’s Carnival.” Only maybe it’s not so extreme. Currently performing at The Actors’ Gang Theatre in Culver City, the “musical nightmare” takes our modern financial system and reframes it as a 1930s traveling carnival. 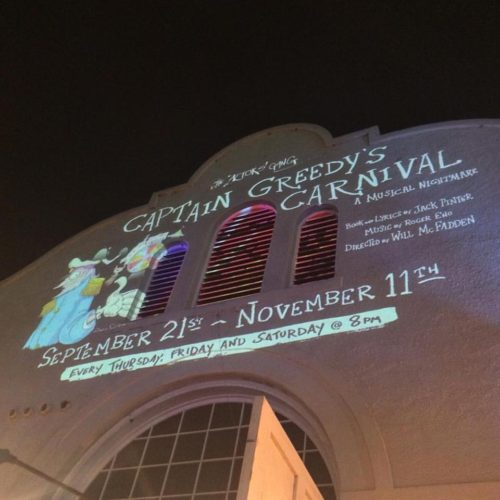 From a lobby promising lurid carnival acts (and serving alcohol), the audience gets welcomed by a clownish barker (Bob Turton). A bare stage with circus tent projections on the curtains sits harmlessly behind the barker as he whips up excitement. There’s a moment of fear that we’re going to be asked to participate, but benches on stage have stand-ins for us — Dad (alternating between Pedro Shanahan and Chris Bisbano), Mom (Guebri VanOver/Lynde Houck), Junior (Ethan Corn), and Girlfriend (Zoe Hall/Julia Finch). They’re middle America all the way, and eager for the show. 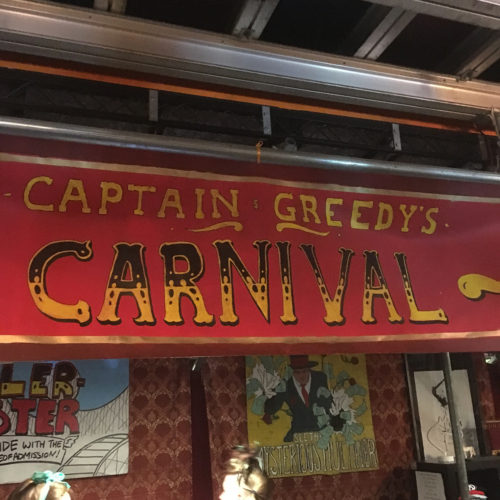 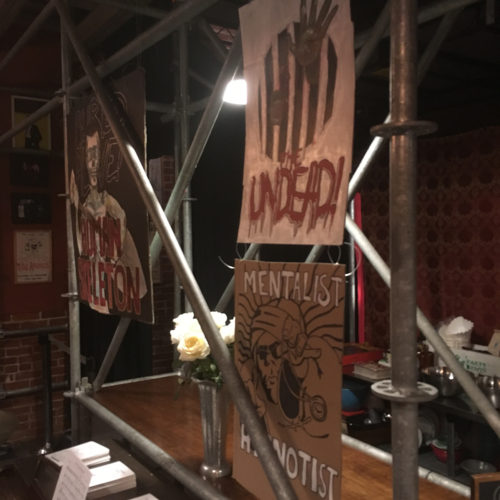 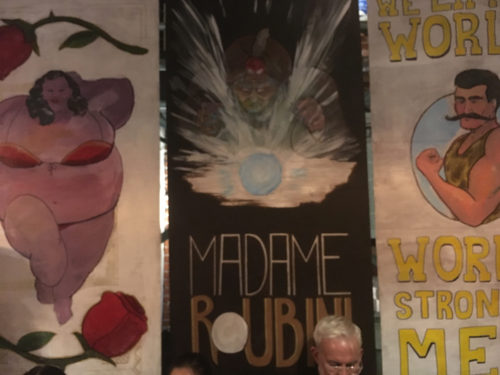 Director Will McFadden doubles as the owner of the show, the titular Captain Greedy. He leads his troupe in Eno’s rousing 1930s style songs — a little tinny, perhaps, but that serves the show and its rough and tumble underpinnings. With a controlled manic gleam in his eye, Captain Greedy seduces and inveigles the Family (and us) through a series of sideshow acts that, if you’re paying attention, might educate you on our free market system. But somebody would rather we not pay attention — and that’s Captain Greedy. He’s a master of showmanship, and the Family willingly joins in the games. It’s only until they get trapped on the roller coaster that they realize maybe things aren’t on the up and up — because what goes up must come down. 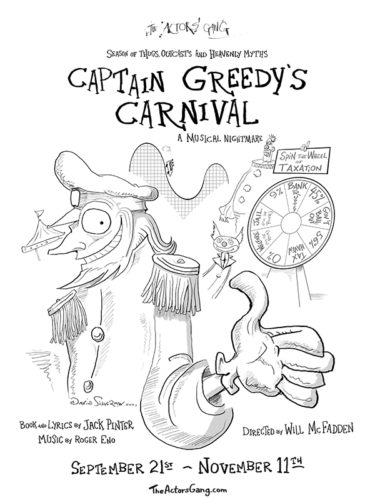 The satire works well. That Pinter and McFadden can drive a plot through a series of sideshow act parodies — including a wandering fortune teller (Mary Eileen O’Donnell) who keeps busting through “from one of those second rate sideshows that don’t offer the quality of Captain Greedy’s” — is impressive. Despite trying to teach us a lesson, it also offers terrifically memorable performances — not just McFadden, whose Captain puts on another layer in the second act that is accurate and disturbing. (Side note: I’ll be stealing/quoting his delivery of the line “I’m fine” for many months, if not years.)

Turton’s hobo clown would have been enough, but he takes on a Lon Chaney vibe becoming the Fakir and Professor Freemarket, a character best left undescribed so you can discover for yourself. With Rough (Paulette Zubata) and Tumble (Dora Kiss), Captain Greedy has a trio of sweetly demonic sidekicks, and Zubatta also pulls off a physical transformation to match McFadden’s that is downright eerie. And hilarious. 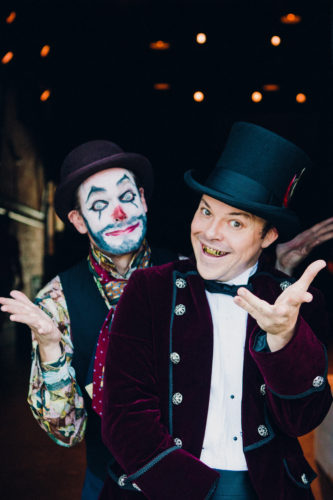 As for the Carnival, the lessons to be had in the show may be uncomfortable, but Pinter and Eno do see something else that we often forget: we’re the marks, yes, but there’s something to be said about our willingness to be.

Maybe “Captain Greedy’s Carnival” is preaching to the choir, as many productions from The Actors’ Gang may be. Co-founded by actor/director/writer Tim Robbins in 1981, the company has a history of “original works and reinterpretations of the classics that address the human condition from an uncompromising and fresh perspective.” They also do a lot of outreach with arts education. They’re using their powers for good. 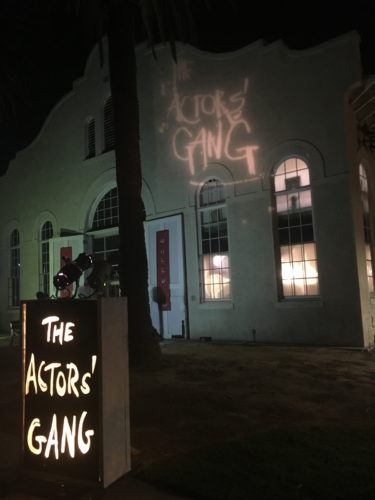